HowTo: Drawing a metric ton of bullets in Godot

Small updates as of January 12:

Big thanks to Rémi Verschelde for pointing it out!

As most of you probably have experienced first handed, some of our beloved antagonist's favorite attacks involve him using his feathers: 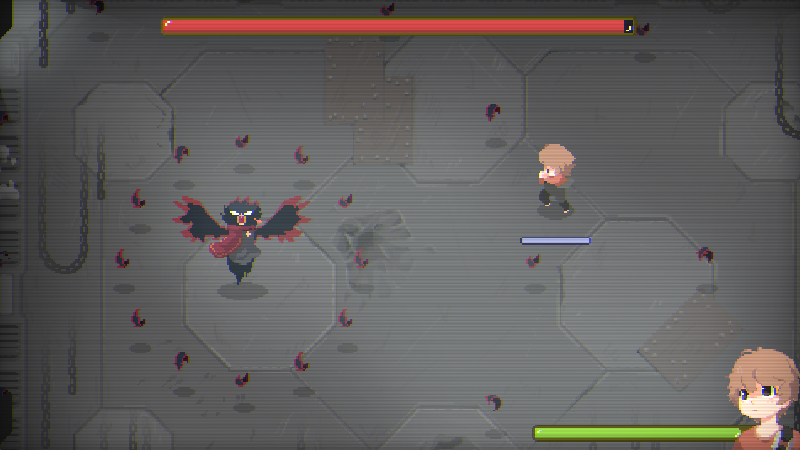 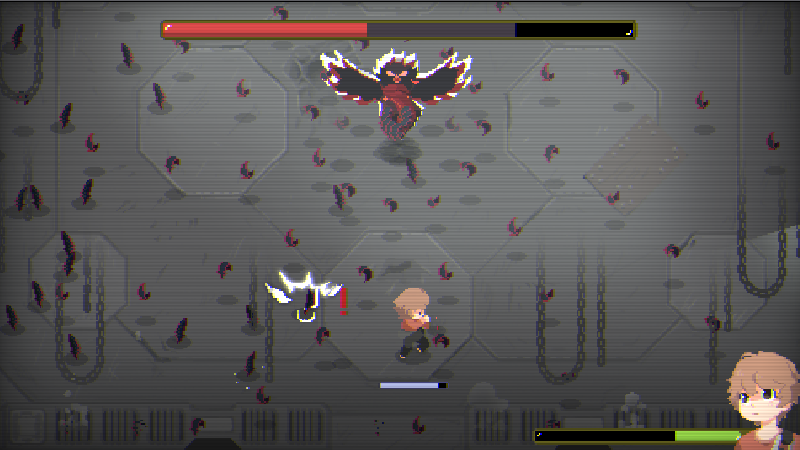 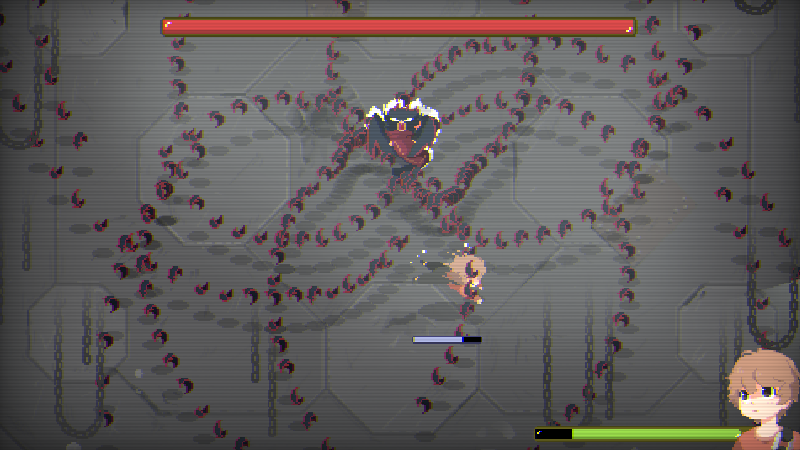 of feathers... (he kinda digs the bullet hell lifestyle).

While we cannot say how he throws that amount of feathers without going bald (probably ✨magic✨ or something), what we CAN tell you is how we implemented the underlying bullet hell system, and all the road bumps we faced along the way.

Sounds interesting? then join us!

OK but...what are we doing?

From the get go, we saw that we needed a bullet hell system that supported the following:

Before we dive in

Before getting started, I would recommend you to take a quick glance over on how scenes and nodes work in Godot (if you are not familiar with the concept), and I'll also be using typed gdscript in the code examples.

I would also recommend you to try our game if you haven't, just to see what's possible with this system (but I mean, you already tried it right? 😉).

Sorry about that... lets continue.

A simple approach for this problem can be just spawning a "Bullet" as a node with a sprite, animation player an a hit detection area, and just leave it like that. Sounds easy enough right? I mean yeah but...you'll see...

Let's implement a simple Bullet scene with the following sub-nodes:

And we'll be firing 20 of those every 0.1 seconds in a ring pattern on every pulse.

Here's a quick glance on what the performance monitor reports after just a few seconds of runtime (graph included to add to the dramatic effect):

So yeah, 230ms for each physics step, and the game's runtime tree ends up looking like this: 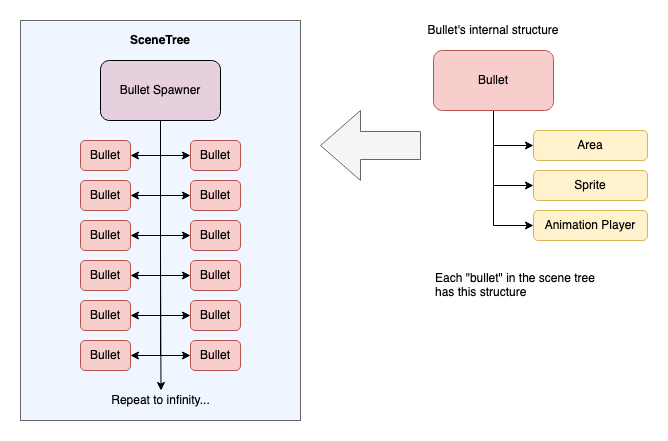 Long story short: each individual "Bullet" node can have a big performance overhead in Godot (and this will probably apply in whatever entity other engines use).

Yeah that's gonna be a big no for me chief; we're making a game, not a PowerPoint presentation.

Note: your performance mileage may vary depending on your computer, but consider this before deciding to stick with this approach:

We're not gonna dwell too much on this example, but worry not, optimizations are coming...

Heck yeah, lets do this!

This is what we want to achieve:

And the implementation process will be separated in two big sections:

Let's first address the root cause of the previous slowdown: the insane number of nodes in the tree. What I propose is that, instead of spawning a new node instance for every bullet, we treat the entire "Bullet Hell Manager" as a single entity with just one area, and that each bullet is represented by a single CollisionShape inside this area.

We would be creating these shapes directly in the physics server instead of using the provided node wrapper, which will remove most of the overhead associated with the former implementation and will allow us to centralize inside the shared area logic such as:

Of course, to keep track of each bullet's properties, the spawner would have an internal array property with all existing bullets registered, but since they would be simple Data Structures rather than Nodes, their performance overhead is WAY lower.

The proposed new structure would look something like this: 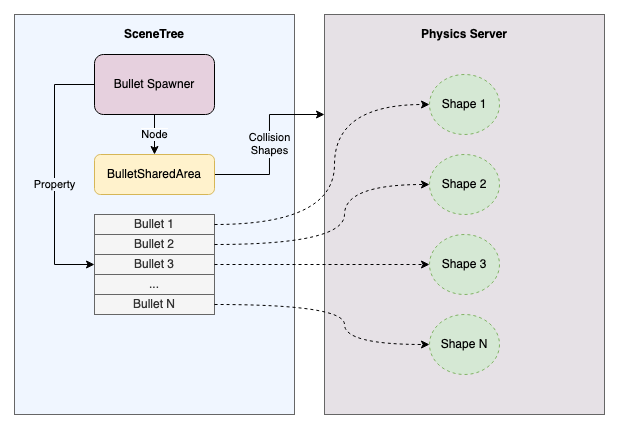 Note how the tree will now only have the spawner node and its shared area, instead of the thousands of nodes we were previously using.

This is what we are gonna need:

Note: we are going to dive a bit deeper into the code from here on out, but if you just want to look at the general explanation (or you can't stand the lack of syntax highlight in the following snippets), the code is available on Github.

To register a bullet in our manager (and on the physics server), we will use the following method:

Which in turn will depend on the following _configure_collision_for_bullet implementation:

Pay close attention to this method, as it's the first step in our glorious optimization journey.

This method will create a new collision shape (more specifically, a CircleShape) and will register it directly to the physics server with the following steps:

Everything we have done so far will register the bullet and spawn the area in the spawner's defined origin position, but you might still be wondering: wait, how to I move them?

As you can see here, each physics step will do the following:

While the creation/destruction process of shapes created by the physics server is done directly via the generated resource id, actually "moving" it inside the area requires us to use the offset number under which it was registered (think of it as the child offset, if we were using CollisionShape2D nodes).

That's why we pass "i" as the second parameter to the method, and why It is very important to ensure a consistent order between the registration offset and the bullet's offset inside the array, otherwise detection shapes can overlap.

One important feature we haven't covered yet is: how the heck do we remove bullets from the game? To address this, we are going to define two "limits" which bullets must obey:

The important thing to consider here is that we need to delete both the bullet from the array, and the shape from the Physics Server: 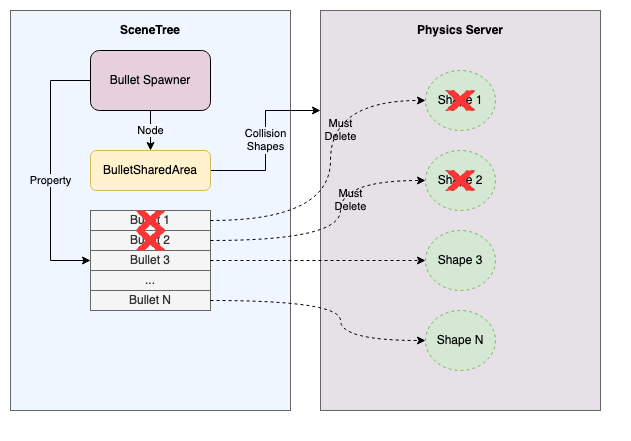 Which can be done with the following calls:

This logic must be called on any bullet that falls under one of the aforementioned conditions.

That is cool and all, but I mean, we keep getting hit by invisible bullets... Is there a way for us to actually see them, even if they are not individual nodes?

Of course there is!

Just as with the physics side of things, we don't want to create a new sprite for every single bullet on the screen; Instead we are going to directly use the "draw" functionality available through the CanvasItem API.

Lets start with something really simple: just draw a texture on each bullet's position.

We are gonna need to add a new image property to our BulletHellSpawner (note: this is actually a treated as a Texture):

Overwrite the _draw method with the following logic:

And finally, call update() inside _physics_process, which will trigger a redraw on every frame:

And voila! we can now actually see each bullet.

But...they all look the same :(, so let's add some animations!

To animate them, we need to replace the single bullet_image variable to an array of textures, and we will need to define how often the animation will change:

And, to manage this animation lifecycle, we need to add the following properties to the bullet itself:

The image_offset property will tell us which frame we are going to render, and it will be calculated using the animation_lifetime property, which will be modified in each physics step. We are going to add the following line of code inside _physics_process, just below the line which modifies the bullet's lifetime:

And finally, we are going to replace the draw method with this implementation, which will handle the relationship between the frames, the image offset and the animation lifetime:

Hey kids, remember how one of the bullet's parameters was "speed"? Well, if you set it to 0, the bullet will just stay in the same spot for its entire lifetime, and this makes it a suitable candidate for spawning numerous static obstacles (hint hint: the floor fires). This means we can use the same system to do things like this: 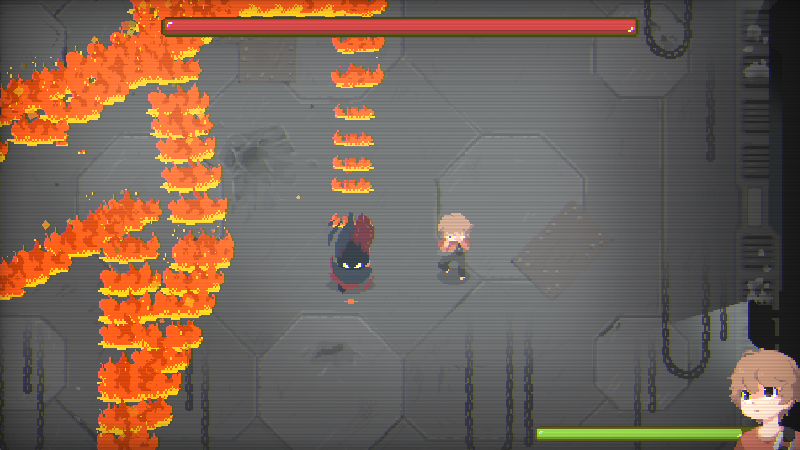 Aw yeah, hit me with that non-existent performance penalty baby.

With our new implementation, the monitor reports this values:

We didn't cover every single aspect of this system (particles, z index calculation and enter/exit animations), but I think this post is long enough as it is, we will probably cover those aspects in a future devlog as well. For now, we hope you found this interesting, and in case you want to see the full project and run it for yourself, here's a link to the source code again:

To end on a high note, here's an example on what we used this system for in our game:

So yeah, good luck! And have a great day.

Great read, thanks for the post! I’m working on a bullet hell game as well so I think this will be valuable. Although I haven’t run into performance issues with the naive approach yet, so perhaps my game is not hellish enough! ;)

Pretty neat. I'm wondering why this improves performance so much. I think the idea is that you restrict the problem so that bullets don't collide with each other so you don't need to check the interaction between pairs of bullets which makes the complexity of collisions O(n) instead of O(n^2) where n is the number of bullets. The main drawback of course is that bullets can't collide with each other.

I wonder if it would be possible to use physics layers to implement that like if I set the bullet  at layer 1 but not at mask 1, then bullets wouldn't check collisions with each other.

Thanks for the devlog! It might help me with my project in the future!

Very interesting.  I built a similar system for a personal project once, although I used a custom distance check for collision.  Your method obviously has the benefit of being able to interact with other physics objects.   I'll have to return to the  concept sometime soon.

This is fascinating, even to a person like me who doesn't code things like that and will probably never do.

It's a bit complicated, but your explanations are still clear enough for me to understand what you mean. It was really interesting!